I put this together a fortnight ago: 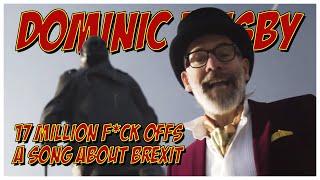 Please help take this song to number one by buying a copy of the single. Here is the link to Amazon (you have to ignore or cancel the invitation to sign up for Amazon music and click through to buy the song for 99p). Here is the link to the iTunes store (again ignore the solicitations to sign up to Apple music and click through to the iTunes store). They don’t make it easy to buy a single these days.

Credits:
Written and performed by Dominic Frisby
Music composed and played by Martin Wheatley (based on a traditional Devon folk song)
Video directed by anon (he doesn’t want to give his name cos it might prejudice other work – that’s how ridiculous things have got)
Audio mixed and recorded by Wayne McIntyre
Assistant director Mark “Yeti” Cribbs

Lyrics:
On the 23rd of June, 2016
The people of the United Kingdom – and Gibraltar – went to vote
On an issue that for some had been burning for years
The question in full – and unaltered – was – I quote

It was the greatest democratic turnout in British history, I do not scoff
And when the time came to speak the British said fuck off.
Fuck off.

If you vote to leave, you’ll lose your job
Vote to leave, you’ll lose your home.
The ensuing recession will last for years
Said David Cameron. Theresa May. George Osborne.
And the Treasury. Tony Blair. John Major. The BBC.
The Bank of England. Mark Carney. The EU. The IMF. The US president. Saint Obama. Back of the cue. Loads of celebrities. Gary Lineker. JK Rowling. Benedict Cumbertwat. Lord Adonis. Who the fuck’s he anyway?
The British told them to fuck off. Seventeen million fuck offs.

They wheeled in the experts to tell us what’s right
They gave us the benefit of their foresight
To leave is calamitous, that’s definite.
Food shortages. No medicine. Planes grounded. House price crash. ½ a million jobs lost. Cost of £4,300 to every home. Stock market collapse. Riots. No sandwiches.There’d be an outbreak of super gonorrhea. They seriously said that. Donald Tusk at the EU said it would be the end of Western civilization as we know it. I’m not joking. And one more thing. If you vote to leave, that makes you racist.
The British told them to fuck off. Seventeen million fuck offs.

The vote is final, there’s no going back
Although now they want to go back and re-vote
I think we know what the answer will be
To Gary Lineker. Alastair Campbell. Dominic Grieve. Chuka Umana. Keir Starma. Vince Cable. Anna Soubry (not a Nazi). Rory Bremner. Armando Ianucci. Delia Smith. Steve Coogan. David Lammy. Lord Adonis. Who the fuck’s he anyway?
The British will tell them fuck off. 17 million fucks offs.