Why England Will Never Win The World Cup 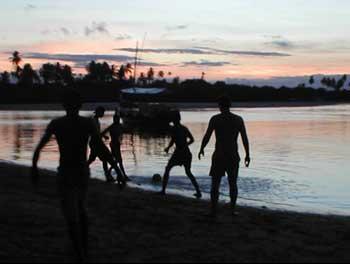 Why are Brazil consistently so much more successful in World Cups than we are? Why do we fall short so often?

One of the most common reasons given for this is that the conditions don’t suit us. World Cups are played in the summer. Everyone I can remember ­ Japan, France, USA, Italy, Mexico, Spain, Argentina ­ has been played in scorching temperatures. We play our game in the winter. Our instincts, our tactics, our techniques, our fitness are all developed in wintery conditions. If the world cup was played in Sunderland sometime between Novemeber and February, we might stand a better chance. In Brazil, they play in the blazing tropical sunshine all year round from the moment they first kick a ball.

There is a lot of substance to this argument. But there’s more to it than that. How often is the best player in the world Brazilian? How often is he English? We have to face a simple fact: Brazil are better than us at football. They have been for a long time. Why?

I’ve travelled through all the big footballing nations, in Europe, Africa and South America. We all love the game, but nowhere do they seem to play it as much as they do in Brazil. That’s what struck me: not how much they watch it, but how much they play it.

I remember flying a six-seater aircraft over the state of Bahia on the north-east coast, where over fifty percent of the 2002 World-Cup-winning side come from, and there were football pitches wherever you looked: in bizarre rural locations, islands in the middle of nowhere, rainforest, scrubland, in the cities, in the slums, people are playing football everywhere at all hours.

And the pitches are terrible. Not the parquet floor of the recreation centre sports hall, or the even concrete of the playground, or the thick grass of our manicured parks; we’re talking holes in the ground, bumpy uneven surfaces, bushes, rocks, scrub. I remember one game I played on the beach, making a marauding run down the right only to be tackled by an incoming wave. So I moved over to the left, but the sand was so thick it was impossible to run the ball at all. The pitches force the players to develop that phenomenal touch and control that Brazilians are so famous for. Without it you don’t have a chance. On our truer pitches, you don’t get found out as easily, so you can get away with inferior technique.

The pitches also force players to be aware, to learn how to adapt their game, to think on their feet and improvise according to the conditions: on the right side you can dribble, but be aware of the waves, on the left you can’t dribble: because of the sand you have to pass. How often does it happen to English sides that when plan A doesn’t work, we’re incapable of switching to plan B?

But there’s more to it than dodgy pitches: it’s lifestyle. Theirs is so much more active than ours and this breeds physically superior people. They live in an outdoor culture. While our kids might stay indoors, out of the cold in front of the television or computer screen, they’re out of the house at breakfast and only come home at dinner. What are they doing all day? Playing football. In the rural locations, where there are barely any cars, everyone knows each other so there’s no need for babysitters or childminders. The kids are running around outdoors all day. They all play barefoot, which not only betters their touch and toughens them, it means that a game can start at any moment on any surface without the need to ‘go home and get me kit’.

It’s also such a young country ­ the demographic is so different to here. Over 30s are almost a rarity. There are majestic pregnant women and kids everywhere. When kids play with kids, they run all day, unconsciously, they push each other physically further. Over here where there are more old people around, the parents themselves are so much older, and there are fewer siblings, kids are more likely to be told to just sit quietly.

Most people don’t own cars, so there isn’t the physical sedation that comes with that.

The majority of Bahians do Capoeira, the Braziliam martial art. It makes them so supple. Some say English players didn’t appreciate the importance of flexibility till Arsene Wenger got here.

I remember another game on a beach in Salvador. When I arrived at the beach these guys were playing. I had my lunch. They were still playing. I let it digest. Then I joined them and played for over an hour until I was exhausted. They were still playing when I left the beach an hour or so later. Everytime they scored a goal the scorer launched into a series of cartwheels, backflips and high kicks. Barely anyone at amateur level over here can do that over here. There the majority can.

The diet is so much better too. Of course in the cities where there is money, there are some fatties. But in the poorer, rural locations, obesity just doesn’t exist. There is no junk food. It’s six-pack city. They eat meat, fish, eggs, rice, flour (bizarrely) and fruit. At morning break or on the bus home from school, the kids aren’t stuffing themselves full of crisps, fizzy drinks and chews.

I was on this remote island with a population of barely a thousand. That’s a small pool of players to draw from. I’m a decent Sunday league player, yet when I joined them for a game of eleven-a-side, I was comfortably the worst player on the field. They all had the fantastic touch, the agility and they were all in peak physical condition. The only spare tyre was being carried by me. Whenever I got the ball I was too exhausted to do anything with it. If you picked any tiny UK fishing village at random, the game played there wouldn’t come close. In any Sunday league game, there’s usually a couple of players carrying some extra weight, often at centre back, here there were none. In a UK Sunday League side, there might be two or three players who can flip the ball up and do fancy tricks well. There they all can.

I’ll never forget the sight of the referee for the game. A tall long-legged man, maybe six foot four, standing in the centre circle with just a whistle and the skimpiest pair of speedos you’ve ever seen.

One of the most common ways football is played is three- or four-a-side with no keeper and tiny goals ­ two sticks about a metre apart. The benefits of this game are numerous. Firstly it means you don’t need many players for a game to start up . How often over here does a game get called off when only six show up? Secondly, in the course of a game, you see a lot more of the ball, the benefits of which are obvious in terms of skill development. Thirdly, it develops you tactically. Three-a-side with small goals is an extremely tactical game. When somebody’s standing in the goal, it’s very hard to score. The best way to score is to draw the opposition away from their goal and then hit them on the break. So you’re actually at your most vulnerable when you’re attacking, because that’s when your goal is exposed. It’s absolutely vital you don’t lose the ball. Do so and you risk conceding a goal. This breeds that Brazilian way of keeping endless patient possession until you almost walk the ball into the net.

They all also play foot volleyball. Again, you can imagine the positive effect of that on your technique.

If Brazil’s huge population are all playing the game at grass roots level at such a high standard, in terms of tactics, technique and fitness, all day long in such intense heat from as soon as they can walk, that can only breed excellence, an excellence that no amount of academies and funding can compete with. It means, sadly, that we are constantly going to be playing catch up, unless we totally change our whole way of life over here. And, let’s face it, that isn’t going to happen.