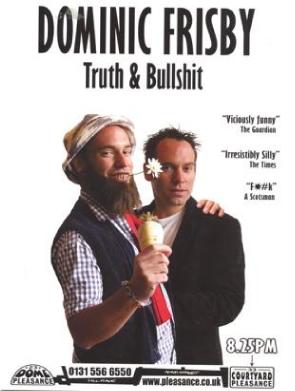 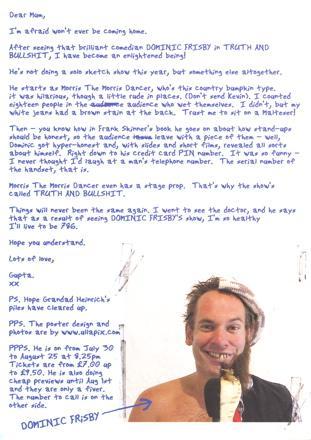 If you want so see the text on the right more clearly – and I think it’s worth it – click here.

In 2003, I got everything right. I had a great room in The Pleasance Courtyard in a nice mid-evening slot. The flyers were stylish and funny (designed by Steve Ullathorne). The ad in the fringe brochure was in the first page of the comedy section. The pre-Edinburgh previews had gone pretty well. Then, in Edinburgh, for the first time, I managed to get two key reviewers, Steve Bennett of Chortle and Nicholas Barber of the Independent On Sunday, who kindly acceped my invitation even though he had no idea who I was, to come and see a early preview. If you get a good early review, you’re made. When I did th Big Value Show in 1999, we got a storming review in The Scotsman which got published on the last day of The Festival. Really useful. So things were looking perfect.

Truth And Bullshit involved a lot of multimedia, but they changed techy for the second night – when the reviewers were coming – and we had never rehearsed. The audience was five – two reviewers and three others. The multimedia was a disaster and so many of the jokes depended on it for laughter, of which there was none. Bennett panned me – I can’t forgive him for it, but I guess he could only review what he saw. And Nicholas Barber, God bless him, went for the ‘if you don’t have anything nice to say, don’t say anything’ option and never reviewed the show, despite kindly laughing throughout.

It was going to be very difficult to recover from Bennett’s panning as a show up there needs a good review to kickstart it. Then a few days later I had a day off. I went home to see my family. And overnight my marriage fell apart.

What a miserable time August 2003 was for me. At the time, it was like a dream. It was as though it wasn’t really happening.