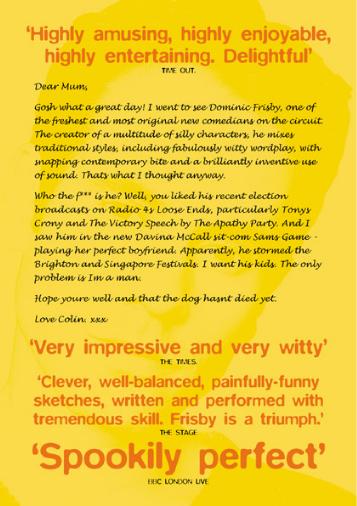 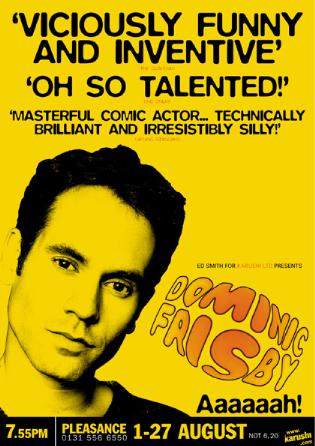 I called my Edinburgh 2001 Show Aaaaah Dominic Frisby, so it would be first in the listings. Unfortunately, that year, they listed everything by performer rather than show title.

Ed Smith was promoter and Jacqui Roberts did my PR. The show was in the Pleasance Dome in its debut (for which again read ‘hard to get an audience’) year. (Actually, the Dome is a pretty good venue now).

It was quite a good show, but it lacked the freshness and the rough-and-readiness of the previous year’s show. I thought some of the material from 2000 was strong and deserved more recognition than it got, and Icouldn’t let go of it. So I put it in this show. The List said I was ‘charming, inventive and very funny’ yet only gave me three stars because there was material there from the year before. They were the only publication of any consequence who came. Three Weeks gave me four stars, but that don’t count ffor shit. I also had a very nice review from standupcom.com. It’s the only review of the show I’ve been able to actually find – here it is:

KING OF COOL Dominic Frisby is one of the best character comedians in the business. His range is fantastic – from the now-retired Upper Class Rapper to Morris the Morris Dancer to Ludwig the Bavarian.

This show contained a fair chunk of material from last year’s but was a far better production. The live character comedy was interspersed with pre-recorded clips shown on a large television. There was plenty to laugh at.

His rendition of a posh playboy is outstandingly funny and the morris dancer was also brilliant. The audience interaction with Ludwig was beautifully done – allowing the warmth of Frisby’s personality to shine through.

The cueing gremlin with the video clips was irksome as was the rather overdone plugging of the Japanese electronics corporate giant that had lent him the television set. But these are minor grumbles about a show that is a first-rate showcase for Frisby’s versatile and profound comedy talent.