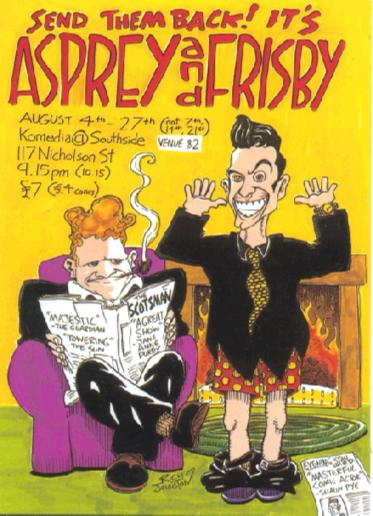 Rich Johnstone of comic book fame designed the flyer. I can’t find the flyer, but here is the original artwork. I’ll put the poster up soon when I find a way of scanning it in.

Asprey And Frisby was my first full-length Edinburgh Show. I had planned to do a sketch show with Hal Cruttenden and Caroline Quinlan, but there were various complications to do with wives being pregnant, so that was postponed, and I fell in with the actor George Asprey. But with a few weeks to go he got major girlfriend problems and had to go to Germany, so I had to reconstruct the show myself. I was secretly quite pleased as I had by then almost generated an hour’s worth of decent solo material. My first and only preview was at the old East Dulwich Tavern and I don’t think I’ll ever have such a good gig again in my life. Jacqui Roberts immediately wanted to do my PR and I already had Ed Smith on board as promoter. Moreover, a clairvoyant had told me she saw me having huge success in Sotland. ‘First prize. I’m getting first prize,’ she said.

The problem was that the show was at The Southside for which you can read ‘no audience’. I had a Perrier judge in one night and I had to cancel the show because we only had two in. Ed rightly bollocked me for doing that and maybe he was right. But it’s a comedy show. It needs an audience.

I was very proud of the show though. It was a one-man revue basically. I had worked really hard on it and there was a lot of strong material. It also got very good reviews, including a stonker in The Guardian, the only broadsheet ever to review a full-length solo show of mine. I’ve since done three Edinburgh Shows and not had The Scotsman in once.

Retrospectively, it was probably the best Edinburgh Show I’ve done. There were several very strong routines in it. I got an agent out of it and a trip to Singapore to do the comedy festival over there. I felt it should have at least been nominated for Best Newcomer, but in those days they never gave it to anyone outside of the Pleasance, Gilded Balloon, Assembly Rooms. To give the panel credit, that has now changed.

Just before the festival, Dominic Frisby was half of double act Asprey and Frisby, until a shock call from Hollywood prompted Asprey to pull out. With just three weeks notice, Frisby rebuilt the act as one-man show. However, judging from the healthy turnout (including fellow comics Chris Addison and Dan Antopolski) and a near-rapturous response, it’s this half of the package that may well go on to see his name in lights.

Frisby’s forte is Lee Mack-ish sketch comedy with an inventive irreverence worthy of Not The Nine O’Clock news. Unusual but hugely funny spoofs include the sexual odours in Morris Dancing and Heaven’s Call Centre(‘press 5 for Methodist, 6 for suicide and other cults’). God knows where he gets these ideas, and God might not be pleased with them. However, some form of deity is surely responsible for Frisby’s comic face which seems to have been made from a rubber ball.

The fabulous fissog excels during mimed spoofs to disembodied backing tapes and a succession of witty characters. Rap music will probably not appreciate The Upper-Class Raah-per, and Frisby’s viciously funny Appalling Bridegroom Speech will do irreparable damage to the marriage rates. You might not want his hand in wedlock, but Frisby is a comic catch.

Dave Simpson in THE GUARDIAN.

George Asprey has gone to Hollywood, leaving his comedy partner Dominic Frisby to reshuffle their act into a fifty-minute solo show with three weeks notice. It’s to Frisby’s credit that he is here at all, and the boy is playing a blinder.

Frisby’s quick-fire comedy is well-written and performed with tremendous skill. The sketches are clever and well-balanced. While the characterisations are sharp without being too showy.

Ludwig The Bavarian mixes German inflections and English words to create weapons-grade puns. They are painfully funny, but really should be sealed in lead and buried somewhere safe.

The Upper-Class Rapper is another winning character, Frisby twisting that mobile face into a clueless horsy expression as he recounts a tale of urban jousting, winning through by judicious use of a golf club. It’s more Earl Grey than Ice T, but a body-popping triumph all the same.

Frisby is all you need for a sharp and silly evening’s entertainment. George who?

Alison Freedbalm in THE STAGE.

Originally intended as a double-act, this show was hastily reconstructed when Dominic’s partner, George Asprey, was called away to Hollywood. We will never know what we are missing, but what’s left is a series of fine comic characters delivering some inspired gags.

The show is patchy, though, with a number of creations failing to live up to the dizzy heights of the best, but Frisby is clearly endowed with a great comedy talent.

He covers broad satire, with speeches from both a Blair clone Labour candidate and a pervy old Conservative, and occasional darker material, such as the hilarious prayer switchboard sketch.

Other memorable highlights include the embarrassing groom’s speech and a pun-riddled Ludwig The Bavarian sketch, and it’s a shame when some of his other characters, including Maurice the Morris Dancer and The Upper Class Rapper, don’t come off.

Still, there’s plenty here for an enjoyable evening’s entertainment for those who dare venture away from the holy trinity of the Assembly Rooms, Gilded Balloon and Pleasance.